The Tudor connection in Ewelme really began in or shortly after 1449 when a high born six year old girl named Lady Margaret Beaufort entered the household of the Duke and Duchess of Suffolk, betrothed to their equally young heir, John de la Pole. Lady Margaret had an impressive pedigree, being a great-grand daughter of John of Gaunt, the third son of Edward III, and it was she who was destined to give birth to the first Tudor monarch. Probably due to the Duke’s dramatic downfall in 1450, King Henry VI annulled the betrothal in 1453, and in 1455 married her at the age of 12, to his half brother, Edmund Tudor. Margaret gave birth to the future King Henry VII in January 1457, four months short of her fourteenth birthday, and 2 months after her husband died of plague.

After the brutal assassination of Duke William de la Pole in May 1450, his wife, Duchess Alice, kept her lands and titles, being under the precarious protection of the saintly but mentally fragile King Henry VI. However, in 1460 she forsook the doomed Lancastrian King and shrewdly married her son John, the second Duke of Suffolk, into the rising House of York. His bride was Princess Elizabeth Plantagenet, the daughter of Richard Duke of York, Duke William’s old enemy and who probably engineered his death. Elizabeth would become the sister of the future Kings Edward IV and Richard III. John and Princess Elizabeth had 10 children and the family managed to survive the shifting perils of the Wars of the Roses. They rose to high positions at Court, so high, that at the death of Richard III’s only son in April 1484, the King appointed his nephew, John and Elizabeth’s eldest son John Earl of Lincoln, his heir apparent!

Meanwhile, Margaret Beaufort together with her son, Henry Tudor, who was safely exiled on the Continent, was conspiring with other Lancastrians to overthrow Richard III. The story of the Battle of Bosworth in August 1485 is well known, and Lady Margaret was doubly instrumental in Richard’s defeat, when her fourth husband, Lord Stanley, treasonably switched his allegiance to Henry at a crucial moment in the battle.

John, the second Duke of Suffolk accepted the new regime and carried the sceptre at Henry’s coronation, whilst his Duchess waited at the Court of her niece Elizabeth of York, the new Queen. However, their son John Earl of Lincoln, who had survived Bosworth, still considered himself to be the rightful Plantagenet king and raised an invading army. In 1487 he was defeated and killed at the Battle of Stoke. Henry VII used Lincoln’s conspiracy to pass a Bill of Attainder to confiscate his lands, but to show he held no animosity to the ageing Duke and Duchess he visited them at Ewelme. Dr David Starkey claims that in the early autumn of 1490 Henry and his Queen, Elizabeth of York, spent a month at Ewelme and believes Henry VIII, born nine months later, was conceived at Ewelme Manor. We can only wonder how the Duchess felt, entertaining the man who had plotted to seize her brother’s crown. However, Duke John had judiciously steered a safe course for himself and his Royal wife through turbulent times, and he died in his bed in 1491. Duchess Elizabeth died in 1503.

Ever financially astute, Henry VII sold back Ewelme Manor to their second son, Edmund de la Pole, for the vast sum £5,000. Henry VII visited Edmund at Ewelme at Michaelmas 1495, when Ewelme Manor became known as ‘Ewelme Palace’. Edmund was not permitted the title of Duke but was known as Earl of Suffolk, and was a frequent guest at Court as cousin to Queen Elizabeth. Nonetheless, in 1501 he and the third brother Richard revolted, fled to the Continent and were declared traitors. Parliament passed a Bill of Attainder against ‘Edmund the rebel’ in 1503 and Henry VII confiscated the Suffolk estates. (In 1504, true to his frugal character, he had the Bishop of Hereford visit to inspect the accounts of the almshouses). Edmund was extradited in 1506 and returned to England on condition he was not executed. Henry VII kept his word and imprisoned him in the Tower, but Henry VIII ordered his beheading in 1513 and thereby the Tudor’s successfully ended the de la Pole’s regal ambitions.

In 1525, Henry VIII gave Ewelme and the title Duke of Suffolk to Charles Brandon, who was married to the King’s sister Mary, the former Queen of France. They became the grand parents of the ill fated nine days Queen, Lady Jane Grey. In 1535 Henry claimed Ewelme back from the widowed Brandon which proved beneficial for Ewelme when Henry VIII was breaking from Rome in 1536. As he had become the patron of Ewelme Rectory he did not dissolve the Chantry at Ewelme, and thus the Suffolk’s foundation was left untouched to prosper. Henry VIII also enlarged the old hunting park to cover 895 acres stretching from Ewelme to Park Corner at the top of the Chilterns. He built a hunting Lodge where Ewelme Park now stands, which commanded wide views over the natural amphitheatre of the valley below. There is an area to the east of Ewelme still known as Huntinglands.

In the church adjacent to the font, there is a brass plate memorial to the memory of 5 years old Edward Norreys who died in 1529. His father, Sir Henry Norreys had been appointed Keeper of the Hunting Park at Ewelme in 1520 and he also held high offices at Court, including Groom of the Kings Stool and thereby was one of the closest of the King’s Courtiers. He was also a friend and supporter of Queen Anne Boleyn, and when Henry was moving to rid himself of his tempestuous wife, Thomas Cromwell falsely implicated Sir Henry (with four others) in a charge of adultery with the Queen. Reluctant to see his favoured courtier beheaded, the King promised Sir Henry his freedom if he would confess, but he went to the block on May 17th 1536 declaring he would die a thousand times rather than ruin an innocent person. (Ironically, the Norreys family had also been instrumental in the downfall of the de la Pole dynasty some 50 years earlier. Sir Henry’s grandfather, Sir William Norreys, commanded Henry VII’s army at the Battle of Stoke in 1487 when John Earl of Lincoln was killed).

How often Henry visited Ewelme and with whom is uncertain, but it is recorded that he held a Privy Council in Ewelme on 25th and 26th August 1540 whilst on honeymoon with his new Queen, Katherine Howard. The village pond is known as Kings Pool to this day, as legend has it that Katherine playfully pushed him in. Another version is that he bathed his ulcerous legs in the pure water.

In 1542 the Palace is described grandly. – “The base court of it is fair and is builded with brick and timber. The inner part of the house is set within a fair moat and is builded richly of brick and stone. The hall of it is fair and hath great bars of iron over thwart it instead of gross beads.” Eight years later, in March 1550, Edward VI conveyed by Letters Patent the palace and park at Ewelme to his sister Elizabeth. During the dangerous days of her sister Mary’s reign, it is believed that she stayed in Ewelme in the care of her stepmother, Anne of Cleves. After becoming Queen, Elizabeth visited Ewelme with her favourite, Robert Dudley Earl of Leicester, and there is an authenticated account of 1570 of Elizabeth riding pillion behind Dudley to visit the tombs of the crusaders in the church at Aldworth. An early 20th century local history by Mrs Prister Cruttwell speculates that a nearby bridleway, was so named because of the amorous behaviour carried on between the Queen and Dudley in that locality. ‘Indeed, there was in our time a lane in Ewelme still known as Love Lane; and when my father [the Rector] asked the meaning of the name he was told by an old villager – “Lor’ Sir, don’t you know, they do say that’s where Queen Elizabeth and that Lord Leicester, they did used to carry on shocking!” Her History also recounts the legend of a young Elizabeth swinging on a walnut tree, which was situated near the gates of the palace and which blew down in a gale only in 1971.

After Dudley’s death, his young arrogant stepson Robert Devereux, Earl of Essex became the elderly Queen’s favourite but was eventually banished from Court in 1600. Being related to the Knollys, a prominent Tudor family beloved by Elizabeth, he went first to their nearby house at Greys Court and subsequently to the hunting Lodge at Ewelme Park. On 26th September 1600 Rowland Whyte Esq wrote to Sir Robert Sydney – “My Lord of Essex I hear is gone to Ewelme Lodge and at Michaelmas he will return to London to be a humble suitor to her Majesty’s sight. As yet there is little hope of it but time brings forth wonderful things… There are many that state the Queen begins to relent towards him and to see him in her heart.” Whyte was mistaken; Elizabeth had Devereux’s beheaded on 25th January 1601. The Keepership of Park became a sinecure of the Knollys family; Sir Francis was followed by his son Sir Henry, who was granted keepership of the Park for life in 1578. In 1584 his brother Sir William was appointed as “keeper of Ewelme Park and master of the wild beasts therein”. Nevertheless, by 1609 “the capital mansion of Ewelme was completely ruined and in decay.” Only the building known as the banqueting hall was left. Today, buttresses on the western corners of the existing Manor are all that remain of the Suffolk’s home.

The ‘Plantagenet’ de la Poles and the ‘Lancastrian’ Tudors were destined to be entwined in a dangerous intrigue for power and riches – with Ewelme as the backdrop for much of the drama. Who could have envisaged on the day young Lady Margaret Beaufort arrived, that within 70 years her ruthless ambition for her son to wear the crown had completely destroyed her husband’s family, but by their defeat, had ushered in a new era of peace for England. 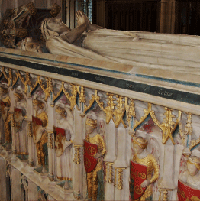 Be a part of it.
Help us preserve Ewelme Church
for generations to come.
Become a friend.